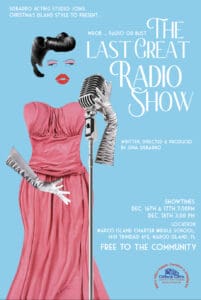 The play takes place in the 1950’s when the radio airways were being taken over by the teens of America. Larry Cosmo the Station Manager sees the writing on the wall; either switch venues and give the teens what they want to listen to or be prepared to shut down as in the long list of fellow NY stations succumbing to the new sound of rock n’ roll.

Station Owner David Pfrom (who prefers to be called Pa-from) is not giving in to what he calls “satanist tribal music” and refuses to change over the music venue and have parents protesting at his radio door.

Desperate times calls for desperate measures. The radio staff concocts a plan by creating diversions to keep David Pa-From out of the radio station so they can slip in some rock and roll numbers and drive up their ratings. Join the hilarious fun as well as a great mix of the classic golden jazz oldies from Glen Miller to Peggy Lee to the newer sounds of rock n’ roll from Elvis Presley to Little Richard.